Air Hockey Table – Can I Get One for My House?

If you love the idea of playing air hockey in your home, you might want to purchase an air hockey table.

This will provide hours of fun for people of all ages.

What is an air hockey table?

An air hockey table enables you to play air hockey, a fun, fast-paced game that makes use of pucks.

But is getting one really worth it?

Here’s everything you need to know.

How Does An Air Hockey Table Work? 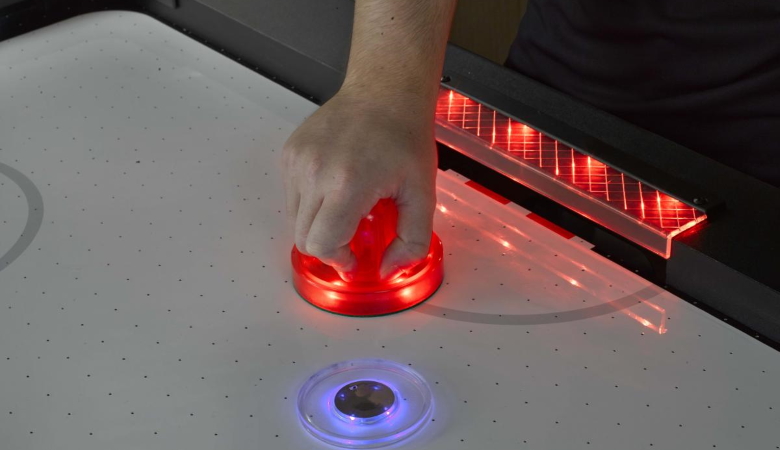 An air hockey table has a playing field made out of shiny plastic.

The field has raised edges so that the puck can’t easily fall to the floor. The table has holes drilled into it on the bottom that produce an even surface, and a fan is located underneath the table to blow air through the holes.

The puck moves with the use of the air pressure so that it looks like it’s floating. After players have hit the puck, they will see that it usually continues to move slowly and this is also a result of the air.

How To Play Air Hockey

Once you have your air hockey table, you’ll need mallets and a puck, as well as someone to play the game with. Each player has seven seconds of play. The first player starts by hitting the puck with the mallet.

When playing air hockey, you have to score points so that you can win the game, and these are awarded when you hit the target. Players will suffer penalties for throwing the puck over the side of the table and if they miss hitting the puck within their seven allocated seconds of play.

How Much Does An Air Hockey Table Cost?

If you’re interested in purchasing an air hockey table, you’ll want to take its price tag into consideration. You can find a range of hockey tables, with simple ones costing around £200 to flashy ones racking up thousands of pounds!

How Much Space Do You Need For An Air Hockey Table? 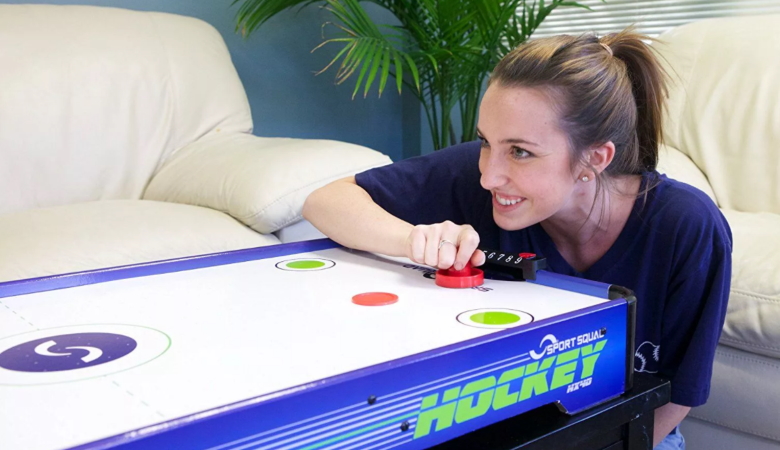 Air hockey tables come in a variety of sizes so you can find one that will fit into your living space.

For a compact solution, you can find small air hockey tables that are between four and seven feet long.

However, it’s not just the size of the table that matters but also its clearance – whether you buy a large or small air hockey table, you need to ensure that you have a minimum of 36 inches of clearance on both ends of it.

There are good reasons for this. You want to be able to have a full range of movement when you play a fast-paced game of air hockey. In addition, you also need to consider that you don’t want the table to look cramped in your lounge or man cave.

You want to be able to move around the table comfortably for other tasks and purposes.

Things To Consider Before Purchasing An Air Hockey Table 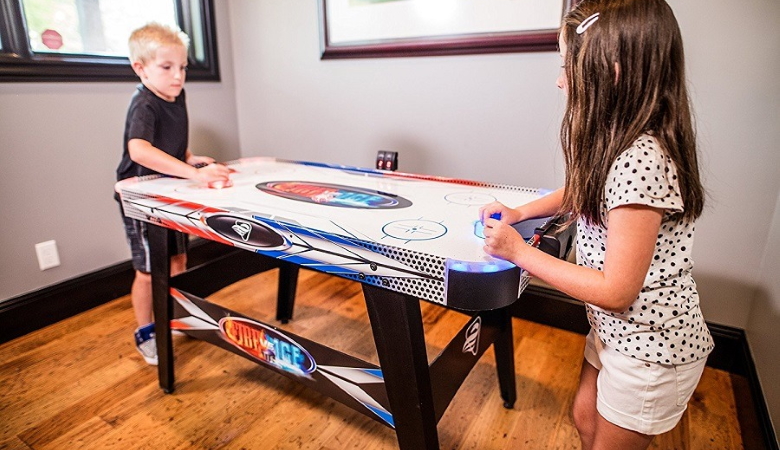 There are four types of air hockey tables, so this guide will help you to figure out which one is best for you and your home.

These tables are small and compact, so they’re great for you if you want to cater to adults and kids who want to play the game and if you want to save space at home.

Bear in mind, these tables don’t have extra features and are more affordable than some other, flashier, air hockey tables. Buy them if you don’t want to spend too much money on your favourite hobby.

These are known as portable tables. They are light, so they’re easy to carry and move around, and they don’t cost a lot of money. Buy a tabletop air hockey table if you have kids or teens who want to play air hockey regularly because they’ll find it easy to move it around.

These are made with heavy, durable materials, such as steel. They also come with extra features to make the games more exciting, such as overhead lighting. Buy an arcade air hockey table if you’re serious about the game and you don’t mind spending more money for one.

These tables look like arcade or standard air hockey tables, but they have a nifty insert so you can turn them into a different type of tabletop game, such as table tennis or pool.

A convertible air hockey table is a must to purchase if you like air hockey but don’t want to be limited to playing it in favour of other table games.

What Is A Boomerang Air Hockey Table? 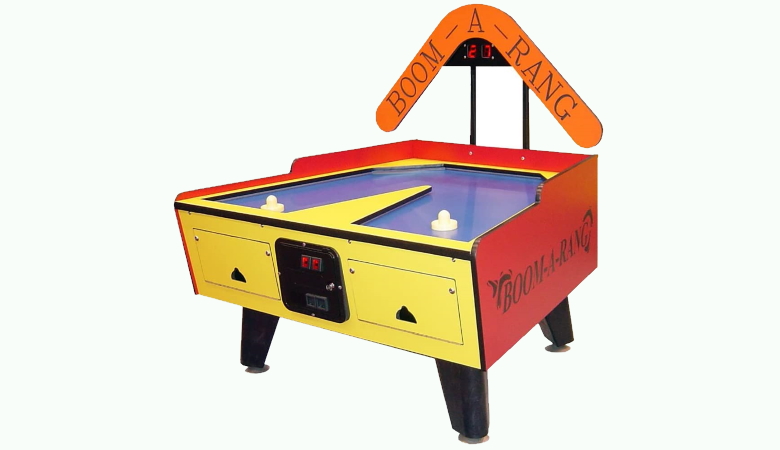 The boomerang air hockey table has a unique design that can help you to save space in your home.

How it works is that both air hockey players will stand at the same end of the table and they’ll hit the puck against the opposite wall.

By keeping the air hockey table against the wall in your home, this will open up the rest of your living space.

Should You Purchase An Air Hockey Table?

Provided you have enough space for it and a power source that it can plug into, an air hockey table can certainly be part of your home.

It’s sure to keep adults and kids intrigued and occupied for many hours at a time, so it’s great for game nights with the family or fun times with friends. It makes an excellent addition to your man cave or game room.

However, it’s worth considering that it does require electricity so that its motor can work. This means that if the power’s out, you’re better off playing something else, such as foosball or table tennis.

Another thing to remember about air hockey is that only two players can play each other at one time. That means if you have other people in your home, they could become bored because air hockey isn’t a multiplayer game in the way that foosball is. 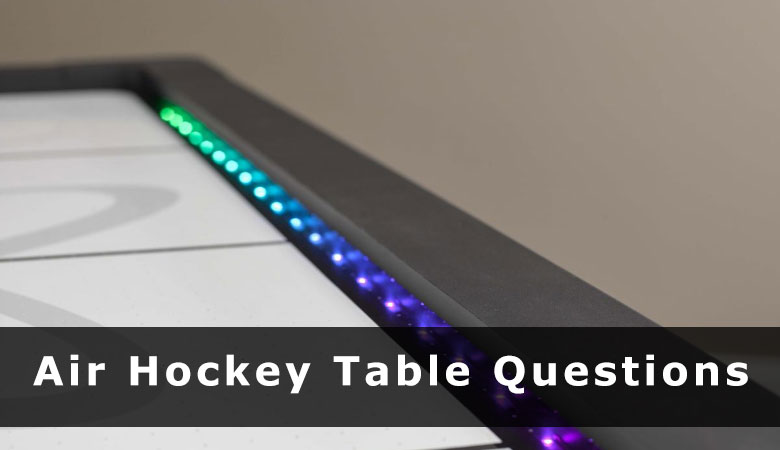 An air hockey table can last between five to eight years, so it does have a pretty good lifespan.

Should you wax your air hockey table?

Although wax makes the hockey table surface slippery, it’s a bad idea to use it because it will block the air holes that are required to ensure air flow.

If you love the fast-paced game of air hockey, you’ll want to bring an air hockey table into your home.