How To Use An Electric Grill

If you want the benefit of a portable and compact grill, an electric grill is worth considering.

You can easily use and store it on a countertop or table.

What, exactly, is an electric grill?

An electric grill is a grill that has a heating element either within the cooking surface or underneath it. It also has a drip pan to collect grease and fat during the cooking process.

Electric grills don’t make use of fuels, which makes them safer and easier to clean.

To make the most of your electric grill, you should know how to use it. If you’re using an electric grill for the first time, here are the steps to follow.

Step One: Make Sure You Give It Space 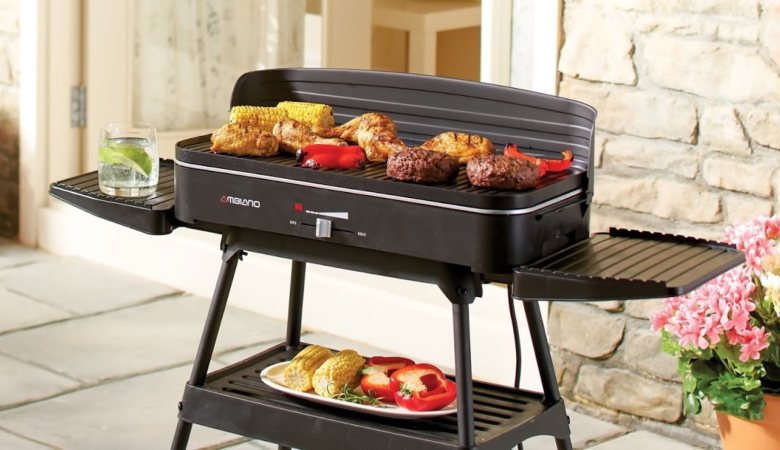 You want your grill to be used on a flat, level surface, such as a table or countertop.

You should also ensure that you clear the area of any clutter – since open grills can become very hot, they are a fire hazard!

Never put your grill in close proximity to other heat sources, such as a propane heater or stovetop. It should always be used in a cool place.

You should always preheat the grill before cooking with it. This will ensure that the foods you grill will be able to sear as soon as they come into contact with the heat.

Grill plates that are hot before food is placed on them will cook the food faster while also preserving more moisture so your food doesn’t become dry or tough.

You might also choose to marinate your meat before cooking with it on an electric grill. This is a good tip to ensure that the meat will have flavour and cook fast as well as evenly. 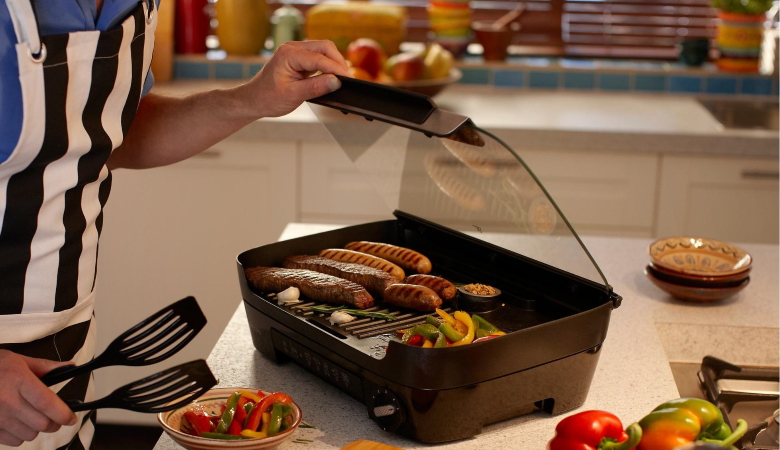 When using an electric grill, you don’t want its temperature to be set too high.

This will prevent you from burning the food but it also prevents smoke from filling up the kitchen.

Even though electric grills produce less smoke than other types of grills, such as charcoal or gas grills, because they use electricity and don’t make use of fuel, you still want to avoid too-high temperatures.

Step Four: Prevent The Food Getting Stuck To The Grates

A problem you might encounter when cooking food on the electric grill is that it can stick to the appliance’s grates. To prevent this from happening, make sure you apply oil to the food before grilling it instead of applying the oil directly to the grill.

Doing the latter will not only risk your food sticking but will cause a lot of smoke to be produced during the grilling process. 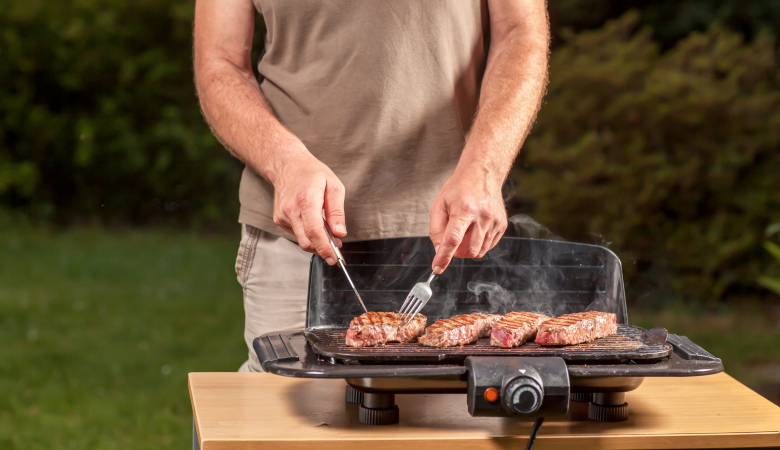 When you’re ready to put your food on the electric grill, you can do so with tongs.

Let the food cook to about halfway, then flip the food around. This will ensure that it cooks evenly.

A good tip is to make use of a digital thermometer so that you can check the internal temp of foods such as meat to be sure that they’re cooked properly.

How To Clean An Electric Grill

Cleaning your electric grill should be done after every time you use it. To clean it, you will have to remove the drip pan and grate and wash them in hot soapy water.

Mild dish soap works well. Scrub any food or grease residue with a sponge dipped in the soapy water. After cleaning the grill, wipe it with a damp sponge.

You should never use any strong cleaning products or metal utensils to clean your electric grill as these can damage its surface and result in problems when cooking with the grill.

The type of electric grill you choose to buy can help you when it comes to how easy it is to clean. Countertop grills are usually of the non-stick variety, which means that you won’t have to spend a lot of time cleaning them.

Another feature to look for when shopping for an electric grill is removable grilling surfaces that are dishwasher safe. This will make cleaning your grill after dinner a breeze! 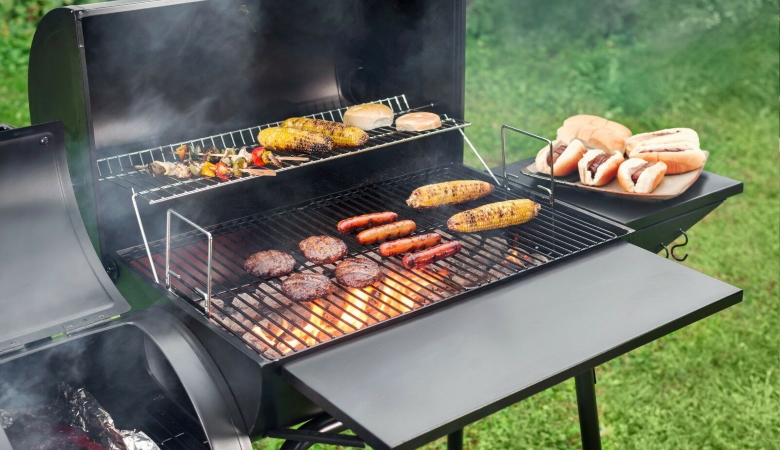 If you’re used to eating food that’s been grilled on a charcoal grill, you’ll know that it usually has a lovely smoky flavour to it. While this doesn’t occur with an electric grill, one of the benefits of the latter is that your food will taste healthier.

If you love food to taste like it’s just been made on the fire, then you might be disappointed with an electric grill and will want to choose a charcoal grill instead. However, electric grills do make cooking easier and quicker, because you just have to flip a switch.

You will also be able to use your electric grill indoors, even in small spaces such as an apartment, because you won’t have to deal with large quantities of smoke that are produced by charcoal grills.

It’s also important to factor in the cost of operating these grills. Charcoal grills might be cheaper to purchase, but they’ll require charcoal to work so that will bump up their long-term cost.

By comparison, electric grills are the most budget-friendly type of grill to operate. Best of all, you don’t have to worry about running out of charcoal or other fuels to be able to use them!

Can You Make Food Cooked On The Electrical Grill Taste Smoky? 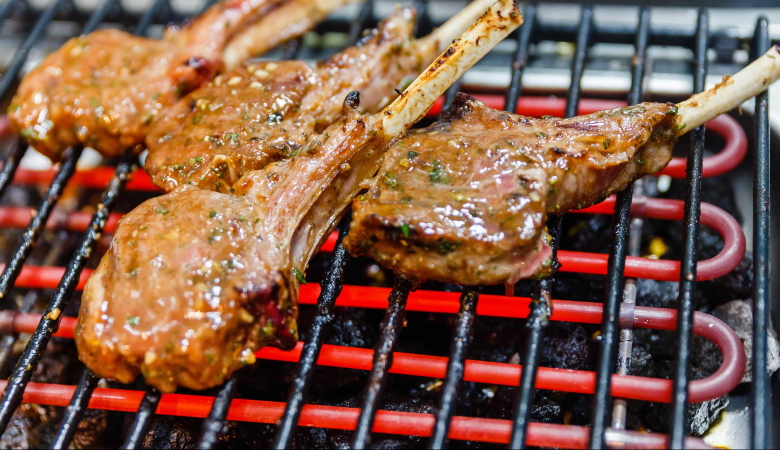 Now, here’s something fun to try on the weekend: making meat on an electric grill tastes like it was made on a charcoal grill. It’s possible to do this and it’s worth trying if you want to make your electric grill even more versatile.

Simply fold some charcoal or wood chips in foil when cooking on your grill, or put pieces of charcoal in the pit of the electric grill. This will give your meat a just-off-the-fire flavour. You can also use a smoker box.

This can store a few charcoal or wood chip pieces. It has some vents on the top of the box to spread the smoky scent to the food you’re cooking. All you need to do when using a smoker box is to put it on top of the electric grill.

After placing the food you want to cook on the grill, close the grill cover and allow the smoker box to send a smoky flavour over your food.

You can also make your own DIY smoker box.

If sourcing an aluminum box is too much of a hassle, you can make a quick and easy “smoker box”: simply wrap some charcoal pieces in foil that has a few holes in it. 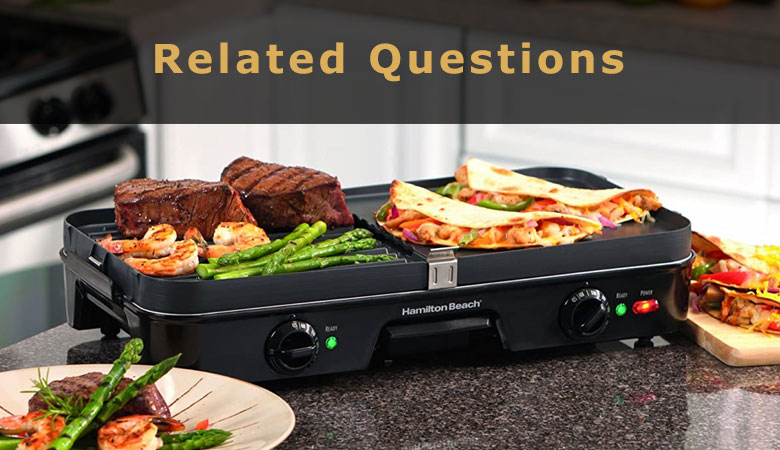 Can you use liquid smoke on food?

You might’ve heard about liquid smoke. This is a natural product sold in grocery stores that you can add to your marinade to make food taste like it was just cooked on a fire. All you need are a few drops of it.

Is cooking with an electric grill healthy?

Cooking with an electric grill instead of a charcoal grill is definitely healthier because your food is not exposed to charcoal flames that can contain cancer-causing carcinogens (via BBC).

An electric grill is a convenient appliance to have when you want to throw the meat on the grill at the end of the day and not have to worry about issues such as sourcing fuel or producing too much smoke.

It’s also perfect if you live in a small apartment that doesn’t have a garden.

In this article, we’ve looked at how to use an electric grill so that you can make delicious food at home. We’ve also featured advice on how to give your meat a smoky, delicious flavour even if you’re not grilling on a charcoal grill or over a fire.